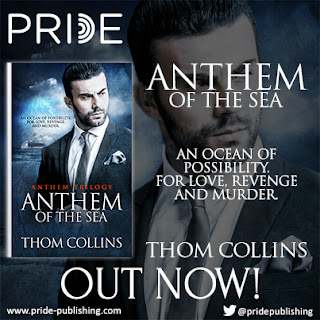 Anthem of the Sea came out last week. To my surprise and gratitude, it’s attracted some fantastic reviews. Check out two of my favourites from Sinfully and Diverse Reader.


I’m thrilled at how well the book has been received. It seems so long ago since I started work on the Anthem Trilogy. In order to do something different with this blog I thought I’d share some of the deleted scenes from Anthem #1 over the coming weeks. The original version of the book was a lot longer than what we released. There was a lot of backstory, flashbacks, additional characters, all that kind of stuff, a lot of which I loved, but in order to get the story moving and maintain a fast pace, I ended up cutting a fair bit. So why not share some of the deleted stuff here?


This is a scene from early on. Originally, I told a lot of Daniel’s backstory in flashback. Those scenes were huge fun to write but ultimately I decided I could still tell the story without them. This is the very first flashback to be cut. Daniel is sixteen and auditioning for the boyband Overload. 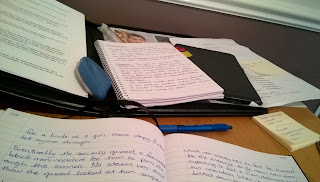 Anthem of the Sea First Draft in Progress


“Are you sure about this Daniel?”


The answer was a very definite no, but sixteen-year-old Daniel Blake would not admit that to his mother. Not after the long trek to London, getting up at 5.00 a.m. to take the early train so he could make the audition for 11.00. He’d scarcely slept in days, so hyped up about the phone call he received on Monday, inviting him to audition that weekend.


It didn’t bother him that the audition process was less prestigious than he’d built up in his mind. They took over half an hour to find the studio, wandering up and down dark back alleys until they found the graffiti stained, battered door. The receptionist was just as unwelcoming as she ticked his name off a list and gave him a bored wave towards the waiting room which was small, hot and very crowded. His mother looked disdainfully at the tattered upholstery of the chairs before sitting down.


There were fifteen other boys waiting to go in. Daniel watched them with dismay. They were so much older than him. And bigger, with their sleeveless shirts and rippling muscles, their tattoos and mahogany suntans. He was a dweeb compared to these guys.


He didn’t stand a chance.


But the morning wore on and the guys went in one by one. So confident to begin with; walking – no, strutting – into the audition room, they came out broken men. Two of them were crying.


“That bloke in there,” blubbered a camp Mancunian with bleached white hair and a nose piercing, “he’s a lunatic. No; he’s the fucking devil.”


“I didn’t want to be in your shitty fucking boy band anyway!” shrieked the next evictee from the audition room.


His mother watched with a furrowed brow. “Maybe this is not for you son. We can still go for tea at the Waldorf and catch the late train home. You’ve got that audition for Mamma Mia next month. I’m sure it’ll be much nicer than this.”


“No,” he asserted. “We’ve come all this way. I want to do this.” He’d heard you needed thick skin to get anywhere in show business. To get out there and pick yourself up when you were knocked down. You had to go to as many auditions as you could to build up that kind of resistance. If nothing else this would help him prepare for the Mamma Mia audition.


Still, he was shitting himself when they finally called his name.


“Good luck,” his mother said. She looked even sicker than he did.


Daniel stepped into a small studio. Floor to ceiling mirrors reflected his terrified features back him. An excessively fat man in a pink, short sleeved T-shirt sat behind a table that was scattered with resumes and photographs. A second man, much thinner, sat at a keyboard player to one side.


“Which one are you again?” the fat man demanded, observing him with cold, piggy eyes.


“Daniel,” he croaked. He coughed to clear his throat. “Daniel Blake.”


The man rummaged through the papers on his table before snatching one close to his face and reading carefully. “Oh, yes,” he said at last, looking at Daniel with renewed interest. “Our little chicken. You’re the youngest boy we’ve seen. What do you think about that, little chicken?”


“F… fine,” he sputtered. “Robbie Williams was only sixteen when he joined Take That.”


The man sucked sharply through his teeth. “The less said about him, the better. Okay then, my name’s Sam Leferve. You’ve probably already heard of me. That over there, is David. He’ll play your accompaniment. We’re auditioning for a boy band but you already know that. I’m sick of hearing my own voice today so let’s here you sing. If I like what I hear I’ll tell you more. Now sing. And don’t be shit.”


Daniel sang the Gallagher and Lyle song Heart on My Sleeve. It was an oldie, one of his mother’s favourites, and he’d always loved it. The vulnerable timbre of his voice suited the song and he dared to believe as he sang it, that Sam was impressed by the way he handled the difficult melodies.


“Well, that makes a change to fucking Angels,” Sam said when he finished. “If I had a pound for every time I’ve heard that shit, today alone, I’d be a very rich, old bastard. When you mentioned Robbie Williams, I feared the worst. But that was good kid, superb. Let me hear you try something a bit more upbeat, a bit more up to date.”


For his second song, he performed Kylie Minogue’s On A Night Like This. Not an obvious choice for a boy to sing but it allowed him to show off his upper register and pop sensibilities. By the time he finished, Sam Leferve was smiling.


“You little wonder,” Sam said, getting excitedly up from his chair. “You fucking beauty. I love it.”


Sam Leferve made his name in the 1980s. First as a producer of HI-NRG disco records, then as the manager for a bunch of big voiced divas who sung vocals on his tracks. The 1990s were not so kind as pop went out of fashion and his out-dated acts floundered, but by the early 2000s pop was huge again with acts like Steps and S Club 7 topping the charts. Sam, who’d invested his money in a couple of gay bars and quietly oversaw their management, knew the time was right for his return to music. Boy/girl combs were all the rage but he had no interest in managing young girls, with their bitchiness and back-stabbing; a boy band was what he really wanted. He set out to find five perfectly cute guys that the gays and the girls would rave about.


By the end of his first audition, Daniel had made it into the band.