Just a quick update today to let you know about a new anthology coming soon from Pride Publishing. Brothers In Arms features five great new stories including my own tale Gods of Vengeance. 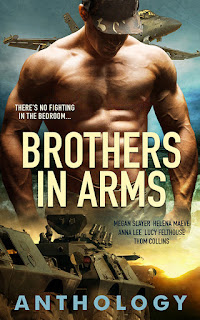 Book Description:
'One Night With You' by Megan Slayer
One night to find the man of his dreams in the least likely place…
Airman Tate Gibson thought going to a party at the local college with his friends would take his mind off of his troubles. He’ll head back to Korea in two days time—after the funeral of his baby sister. He’s always taken responsibility for her and he’s not ready to deal with her being gone. He wants a man to help him deal with his sadness and give him a reason to get through his deployment.
Raine crushed on his neighbor across the hallway, but once he spots the hunky airman his thoughts center on Tate. He wants to strip the handsome blue-eyed man down and lick him everywhere, but geeky guys like Raine never get the man. He’s stuck playing the perpetual wallflower.
Will one night tear them apart before things get hot or will it be enough to bring these two wounded souls together for a long-term engagement?
'Spoil of War' by Helena Maeve
One man’s prize is another’s nightmare.
When Briar’s partner Kai returns from the Federation’s latest skirmish with a handsome prisoner in tow, Briar is both envious and wary. It is common knowledge that the tribespeople of Ganymede are violent brutes who delight in murdering and enslaving their enemies, and Dallan can be no different.
As an officer with the Federation’s propaganda machine, Briar has produced plenty of material to substantiate the need to wage war in the asteroid belt. Kai, for his part, has slayed many enemies while on active duty and watched just as many of his friends perish in combat.
For a foe to save rather than end his life is unusual in the extreme. Sparing him the horrors of a prison camp seems like a fair exchange, even if the only alternative he can offer is thraldom.
'Would You Wait For Me?' by Anna Lee
Kip made a promise to Lucas that he’d come home to him after his tour overseas, but will Lucas be waiting for him like he promised?
Kip Foster is nearly finished with his tour overseas and is ready to leave the hot desert and constant threat of danger. He hopes to reunite with his lover, Lucas Danvers. When he calls to ask Lucas to meet him at their hotel however, Lucas breaks it off with him. Lucas no longer wants to be his dirty little secret. He says he’s waited long enough for Kip to make a choice and he hasn’t. Devastated, Kip realizes how much he loves Lucas and that if he’s to win him back he needs to do something big. He needs to not let hate and fear control his life. So he makes plans to start living life the way he wants to. Will Lucas still be waiting when he comes home though?
'An Interesting Find' by Lucy Felthouse
A relaxing summer holiday is turned upside down by an interesting find…
Nathan and Lee are on a relaxing summer holiday in the UK. They plan to do lots of walking and exploring in the beautiful English countryside. Naturally, typical British weather derails their plans on their first day, leaving them cooped up indoors with little to do but read.
When the weather clears, the men eagerly put on their hiking boots and head out for a walk. However, when they reach their destination—a pond a little distance from their holiday cottage—they make a shocking discovery. An odd-looking bundle of rags turns out to be an unconscious man. With no one else around, and no mobile phone signal to call for help, they manage to get the stranger back to their cottage to get him warm and dry, and figure out what to do next.
When their unexpected house guest regains consciousness, however, things just get more complicated. The stranger—a British soldier called Jonny—doesn’t want the authorities to be notified of his presence. As the three men try to come to some agreement, the sexual tension in the air becomes apparent, and suddenly the last thing on any of their minds is leaving the cottage…
'Gods of Vengeance' by Thom Collins
United in passion. Driven by vengeance.
Owen Hazard, a young farmer is dead. Murdered while he tried to prevent a robbery on his land. His older brother, Captain Mark Hazard, returns home for the funeral. Owen’s best friend, Riley runs the local pub. He has information about the night Owen was killed—he knows who was responsible. The police are doing nothing. Vengeance is their only option. United in their passion for each other and a thirst for revenge, Riley and Mark must take the law into their own hands if there’s to be any justice for Owen.

The book goes on general release from 8th November but you can preorder your copy from 27th September and get an early download from 11th October. 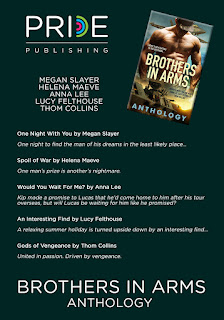