This is another overdue update, for which I apologise. I don’t have any excuse, other than I’ve been working, but hey, who isn’t busy with work? So what’s going on? The Anthem Trilogy is what. I’m deep into work on this series. Book one is due for release on 20th June and I’m currently doing a final polish on book two. That should be going off to the publisher next week. Then it’s full steam ahead on book three. I’ve already got the characters in place and two thirds of the outline prepared for the final novel in the series. I don’t want to rush it. It’s so important to get this right. If a reader stick with me for three books I want to reward with them with a major climax. I aim to do that with all my stories but the pressure is so much bigger when tying up a trilogy.
I’m currently planning the promotional schedule for Anthem of the Sea and will update you with details of a blog tour in the next couple of weeks.
In the meantime, my novella Silent Voices is currently available for early download from Pride Publishing, ahead of the general release date on May 9th. Silent Voices is a pacy erotic thriller. 20,000 words, so a perfect length to devour in one or two sessions. Anyone who enjoyed Gods of Vengeance is going to love this. 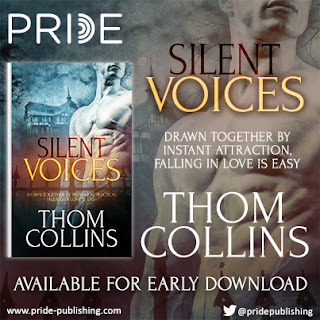 EARLY DOWNLOAD HERE
Blurb:
A desire for justice as strong as their passion for each other.
Concerned about the welfare of his young cousin, Josh Jackson, a restaurant owner, traces the boy to Winterstone Grange, a gated manor deep in the country. Miles from anywhere, the protected walls of this stately house conceal dark secrets. Josh’s search brings him into contact with Ed Brolin, a handsome journalist who has spent weeks investigating the secrets of the Grange and its owner. Ray Armstrong is a wealthy businessman with influential connections in parliament and the police. Ed knows exactly what goes on at the Grange but, without evidence, he hasn’t got a story.
Drawn together by instant attraction and a powerful hunger for justice, Josh and Ed are determined to expose the sordid secrets of the Grange despite the risks. Josh has never met a man like Ed before—so strong, determined and masculine. Falling in love is easy. But they’ll have to put their emotions aside if they’re going to give a voice to all the silent victims of Winterstone Grange.