It been a while since I’ve posted anything about my own writing so thought I’d dive right in today with a brief update on what I’m up too.  It's absolutely sweltering here in the UK as I write this. We're in the middle of an extreme heatwave with the thermometer telling me it's 31 degrees celcius in the house. It seems like an age since Anthem of Survival was published last December. I haven’t been idle in that time; it just seems that way.


Big news first, my next book will be published in the spring of 2020 by Pride Publishing. Never Too Famous will be the first in an on-going series of novellas exploring success and the lengths people are willing to go to achieve and sustain it. I don’t want to say too much as it’s still a way off but Never Too Famous was a fun book to write. It’s set in the world of reality TV and is filled with great characters – stars and wannabees – with a hot romance right at the core. I can’t wait to reveal more. I’ve just outlined the second and third stories and will start writing them in the next couple of weeks.


Right now, I’m putting the finishing touches to a standalone novel, which has been my primary focus for the first half of 2019. This has been a very rewarding book to write. The setting in my native North East England and it explores the dangers and romance for a crew of lifeboat volunteers. I expect to have this ready for submission in another week or two and will share any further developments as they happen.


That’s pretty much were I am right now; finishing off one book with the next two planned. That will occupy me nicely until the end of the year. I’d also like to write a couple of short stories in the downtime between drafts of the larger books, with a view to putting them out in 2020. While 2019 has been quiet on the publishing front, I’ve got lots of good things planned that will make 2020 extra special.


It hasn’t been all work. I went on an amazing cruise in June, sailing all around Iceland. Probably the best holiday I’ve ever taken. Iceland is the most incredible place, and in the height of summer with twenty-four-hour day light, it was really something special. While a cruise was a great way to see a lot of the country, I feel like we barely scratched the surface of the place. I can’t wait to go back one day and explore in greater depth.


In September I’m off again, this time sailing around the Baltic and visiting a lot of new places for the first time; Helsinki, Russia, Denmark, Sweden. I can’t wait. I’m sure I’ll get plenty of inspiration for future romances. 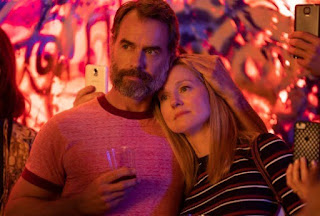 One of the best things I’ve watched this summer has been the Netflix revival of Tales of the City. I approached this with initial caution, being a huge fan of the books and the original TV series, but I needn’t have worried. The new show is outstanding. I fell in love with the characters all over again, so much so I’ve gone back to re-read the books. Some of the cast of the original show are back and others have been recast but it works so well. I’m crazy about Michael Toliver, played this time by Murray Bartlett. I always loved the character of Michael but there is something about seeing him now as a middle-aged man that really speaks to me. Don’t miss it this fantastic show.
Stay safe and enjoy the rest of the summer.