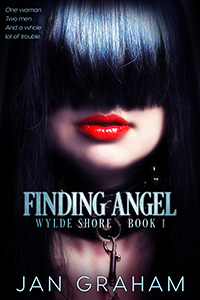 
It’s time to participate in a dangerous dance of murder, trust, love, and intrigue.


Trouble isn’t Angel’s middle name, so why does it follow her wherever she goes? Her life should be less complicated after the death of her ex, but his actions continue to haunt her. While trying to gain some distance from a crime boss who has a contract out on her, and a cop who believes she’s the key to taking said bad guy down, Angel runs straight into the arms of two dominant brothers with an unexpected interest in making her theirs.


Faced with a difficult choice, Angel must decide who she can trust. Two kinky brothers that she just met? A cop she has more in common with than she realizes? Or a crime boss adept at murder? Trusting them all may end up saving her life.


Finding Angel is more than a love story between one woman and two men, it’s a romantic suspense with a whole lot of trouble. 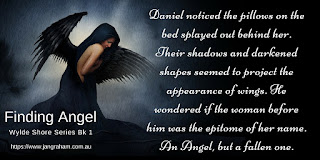 
Angel felt dirty, which probably had less to do with cleaning and more to do with the fact she’d just finished texting a crime lord. Adrian always had that effect on her. He may have been a good-looking, well-dressed, and very suave man, but the way he looked at her—like a predatory animal eyeing its prey—always made her nervous.


As she stood in the shower letting the warm water run over her body, Angel imagined the last five years of fear and turmoil washing away. She hadn’t sought out anything that she encountered in her life leading to this point. However, thinking back, she knew she had made some very bad choices. That had to change. If the last five years had taught Angel one thing, it was this. She was worth more than she had encountered in her life thus far. She was a good woman, caring and kind, and someone of that nature deserved better.


Angel remembered the day she’d arrived home to find Samuel gone. She shivered as she recalled the sight that met her when she entered the house. It was a mess. Everything thrown on the floor, cupboards open, books and CDs strewn across the living area, the stereo speakers kicked in and pillows from the sofa ripped open. Samuel’s computer was still on his desk, the side ripped open and a gaping hole where the hard drive used to be. If her life had been anything like normal, then she’d have been on the phone to the police within minutes. But, there was nothing normal about her life. And in this house, police were the enemy.


Angel recollected walking into the kitchen to place the bags of groceries on the counter as a knock sounded on the door. One of Samuel’s associates greeted her, only to become annoyed when he discovered Sam wasn’t home. Angel sent him away, telling him to ring Samuel if he needed to see him. After he’d left, Angel heard the faint ring of Samuel’s phone. She knew he wouldn’t have left it behind. It was like a third arm for him, he was never without it. She’d walked toward the back of the house, reaching for the back door just as the phone stopped ringing.


It was then she noticed the garage door was ajar. They only used the garage for storage. It was a single old building away from the house, built during a time when cars were smaller and detached garages popular because people didn’t mind walking to get what they needed. Angel recalled the crunch of the gravel drive under her feet and the creak of the rickety wooden door.


The air was cool around her as she stared at Samuel’s Harley Davidson belt buckle. She lowered her eyes, scanning down his legs to his feet. He wasn’t wearing shoes. His feet looked pale, she’d thought, as her eyes scanned back up his body to his chest. His shoulders relaxed, his hands by his sides. She smiled at him when her eyes reached his face, his head slanted to the side, the securely tied noose around his neck attached firmly to the middle rafter of the roof.


Angel drifted back to the present. As the water from the shower tumbled over her body, she smiled. She couldn’t have dreamed of a better end for that shit of a man.


In short, she is generally a bit of an eccentric who lives her life slightly left of center. You can find out more about Jan and her work by stalking her on the various social media sites where she occasionally hangs out.