Right Here, Right Now is a new anthology of contemporary MM romance from Pride Publishing. It features my rugby themed story The Coach. Find out more about the book below and follow the pre order link. 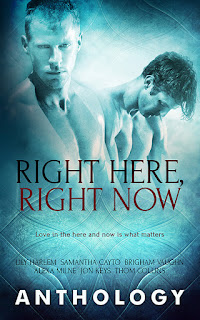 ‘Undercover’ by Lily Harlem
When two alpha males collide, sparks will fly.
Samuel’s job is to scrutinize the store’s customers and make sure everyone stays on the right side of the law. One sexy guy in particular has him not only hot under the collar, but filling his dreams and starring in his wildest fantasies. Yet, he can’t pluck up the courage to spark a conversation and find out if those lingering looks mean what he thinks they do.
Until, that is, a misdemeanor occurs giving him the chance to haul hot bloke into his office. The only trouble is, Samuel soon realizes he’s bitten off more than he can chew. This man isn’t going to take a reprimand lying down, no matter how much attraction is fizzing between them.
There’s only one thing for it and that’s to allow the heat between them to reach combustion point—even if it means switching, pushing boundaries and bending the rules. Undercover or not, burning desire and scorching lust can’t be ignored.

‘Never the Groom’ by Samantha Cayto
A cold night turns unexpectedly hot.
Ian Cabot has led a shy, sheltered life ever since a plane accident killed his mother and left him emotionally and physically scarred. His father’s marriage of convenience forces him into the magnetic orbit of his soon-to-be cousin by marriage. The man who meets him at the airport is just the kind of commanding man he hopes will rid him of his virginity. Too bad anything between them is out of bounds.
James Reynolds has no time or patience for his cousin’s social-climbing marriage, and even less for taking a detour to deal with the pampered son of her fiancé. As a hard-working and dedicated family man, he agrees to pick Ian up and get him to the wedding. The pretty college boy who hides half his face is not what he is expecting and proves to be disturbingly tempting.
Whatever discipline Ian and James have to keep their relationship strictly familial is tested by an unseasonable blizzard and the sexual heat they can’t ignore.

‘The Soldier Next Door’ by Brigham Vaughn
Sometimes, love is right next door.
All twenty-seven-year-old Travis Schultz is supposed to do is keep an eye on the kid next door for a few weeks while his parents are out of town. Eighteen-year-old Owen Wheeler has other plans. Newly graduated, with plans to enlist in the Army, Owen wants to get laid before he ships out and he’s had a crush on Travis for years.
The age difference and the responsibility he’s been entrusted with make Travis hesitant, but the attraction is too much to deny. When the casual one-night stand turns into something more, Travis has no idea how to tell Owen how he feels. He misses his opportunity before Owen leaves and is left at home with a broken heart when Owen cuts off all contact.
When they meet again years later, Owen is in the midst of recovery from being injured in the line of duty and Travis will have to decide if he can forgive Owen and try again.
Reader Advisory: This book contains brief mentions of PTSD and war-related injuries.


‘The Matchmakert’ by Alexa Milne
Sometimes you need a little push.
Josh is a carer and Simon is his employer. Each has a secret they keep from each other, but not from the other person in their lives.
Tom may only be a teenager, but he can see the attraction between his father and Josh. Can he bring them together and create a happy ever after for all three of them?

‘Throwaway’ by Jon Keys
Garrett escaped the death threat from his family, but the Texas Panhandle is where he may be at the end of any hope.
After being thrown out by his parents, Garrett’s planned escape ended when the last of his money landed him in a tiny West Texas town with no more resources than a backpack with his entire worldly goods and the change in his pocket. He huddles behind a dumpster to avoid the broiling noonday heat. As the sun moves below its apex, one of the workers from the convenience store tosses a few bags of food past its prime into the dumpster and Garrett is soon surrounded by the scent. His hunger overcomes his caution and Garrett takes advantage of a distraction to slip into the trash and snag the food. Garrett finds himself threatened by a group of locals when he discovers the bags hold more than stale burritos.
Trevor, the manager of the regional farmers’ co-op, rescues him before he goes to jail. A day later, after a hot shower, fresh clothes and a full stomach, Garrett is excited to have a possible solution to his problem.
When pieces disappear from an unusual collection of jewelry, Garrett and Trevor team up to find the actual thief.

‘The Coach’ by Thom Collins
A routine assignment unlocks the secrets of his past.
News man Josh Holleran knows very little about sport and prefers to cover the crime desk. When his editor sends him to interview representatives from the local rugby team, Josh has little enthusiasm.
The Woodbridge Warriors are celebrating, having qualified for a national competition and it’s a significant story for the rural area, but Josh knows nothing about the game. His interest increases massively when he meets Cole Jansen, the hunky team coach. Cole is a big, beefy guy in his mid-thirties, exactly Josh’s type.
There’s something very familiar about him. Josh can’t shake the feeling that they’ve met before. Soon he realizes exactly who the coach is and how he knows him. A shameful secret from Josh’s past is about to be revealed and he’ll have to overcome his regret to stand a chance of happiness in the future.
General Release Date: 3rd October 2017 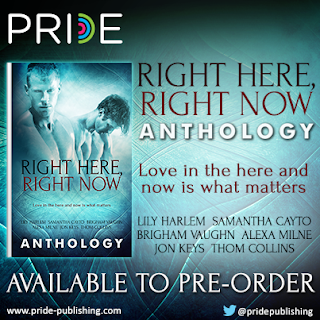 https://www.pride-publishing.com/book/right-here-right-now
Posted by Thom Wolf at 00:00