My next novella Silent Voices is available to pre-order from today, exclusively from Pride Publishing. 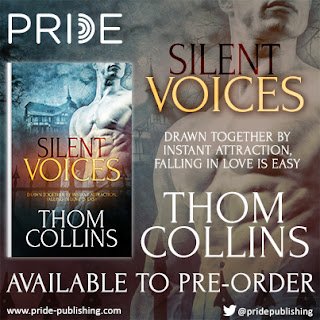 A desire for justice as strong as their passion for each other.
Concerned about the welfare of his young cousin, Josh Jackson, a restaurant owner, traces the boy to Winterstone Grange, a gated manor deep in the country. Miles from anywhere, the protected walls of this stately house conceal dark secrets. Josh’s search brings him into contact with Ed Brolin, a handsome journalist who has spent weeks investigating the secrets of the Grange and its owner. Ray Armstrong is a wealthy business man with influential connections in Parliament and the police. Ed knows exactly what goes on at the Grange but without evidence, he hasn’t got a story.