Never Too Famous. What's it about? 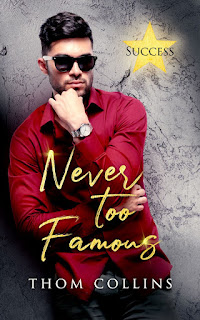 My new series of novellas examines the things people are prepared to do for success and the high prices they will pay to maintain it. The first book Never Too Famous deals with the highs and lows of celebrity.
It’s a common perception that famous people want for nothing: big brands queue up to give them stuff for free and everyone loves them. Yet you only need to read the comments section on any celebrity’s social media account to see how untrue that statement is. In a lot of cases the haters outnumber the fans. It must take a thick skin to read the rude, insulting and derogatory comments complete strangers feel entitled to make against another person. Everything is up for criticism: looks, weight, age, fashion, family, sexuality, race, gender, and because that person is famous, it’s seen as an acceptable part of the job.
And yet, millions of people crave that kind of success. As a person who values privacy, this is something I have always found fascinating. Never Too Famous is a love story set in the world of reality television. Harry and Grant are TV stars from completely different backgrounds. For Harry fame happened by chance, when a documentary crew filmed a fly-on-the-wall series about life on a luxury cruise ship, where he was working as a marine engineer. He’s never been entirely comfortable with the trappings of fame. While Grant became famous on a show called Sexy Northerners, and there’s nothing he won’t do to maintain his position as the shows leading hunk; sex-tapes, fake relationships and publicity stunts are all in a day’s work for him. The two men couldn’t be more different, and when they meet things get hot very quickly. 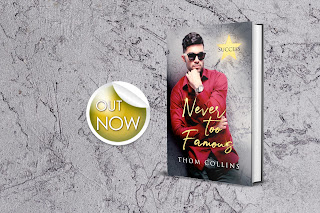 
Blurb: They’ll do anything for fame, whatever the cost.

The bars along the canal were busy for a Sunday evening. People sat at the outside tables, laughing and drinking. From the corner of his eye, he clocked that someone had recognized him and was moving in his direction. Harry tucked his chin and kept walking. He wanted to reach his room, lock the door and spend some quality time alone.

When a hand touched his shoulder, he expected it to be a fan, eager for a photograph. He turned, hoping to make it quick, and was surprised to recognize the smiling face that greeted him.

My God, he’s handsome. Up close, his chiseled features and warm brown eyes were exquisite. His smile grew wider and his eyes sparkled with amusement.

“I thought it was you,” Grant said, thrusting a hand forward. “Nice to meet you at last.”

“You too,” Harry said, accepting the firm handshake.

“I wanted to say hello last night, but you left the club before I got the chance.”

“Sorry.” Harry shrugged, unable to tear his eyes from Grant’s hypnotic gaze. Dark and moody, like a film star from a different era, a 1950s matinee idol who’d stepped straight off the screen and been transported to modern-day Manchester.

You could cut yourself on his cheekbones, they’re so sharp. And that jawline…

“It wasn’t really your scene, was it?” Grant asked.

“I guess not. But sorry, again, I should have come over before I left. It was rude not to.”

“Why don’t you make it up to me now?” Grant said, gesturing to the bar where they had stopped. “A drink. I’ve got nothing else to do right now. How about you?”

The man was a natural flirt. That was obvious. But he had an undefinable and powerful charisma. Harry’s heart beat faster. Grant had an instant effect on him. “Why not?”