ANTHEM OF THE DARK: Available to Pre Order Now 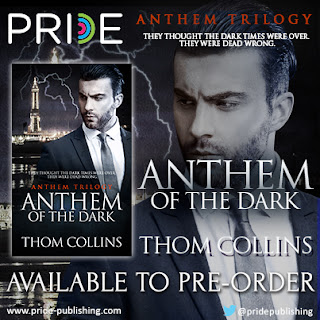 Eleven months later ... the time for revenge has come.


Eleven months after his attack on board the Atlantic Anthem, Daniel Blake has made a full recovery. Physically at least. The mental scars from what Oliver Gill did to him have been harder to deal with. But Daniel’s a survivor, and determined to move forward with his life. A life that includes Elijah Mann. Elijah has been a constant source of support throughout Daniel’s recovery. His love and encouragement have brought Daniel through the darkest days. Living together and deeply in love, they are stronger than ever.

Or so it seems. A murderer is at larger, a killer with a unique purpose, and when the first two victims are identified, a terrifying link is established. The dead men began their careers in the boy band Overload with Daniel and Oliver Gill. Someone is out to avenge Oliver’s death. Someone who won’t stop until all members of the band are dead. And for a relentless killer, Daniel Blake is the ultimate prize.