You can pre order my new ebook from Gods Of Vengeance from Pride Publishing right now. 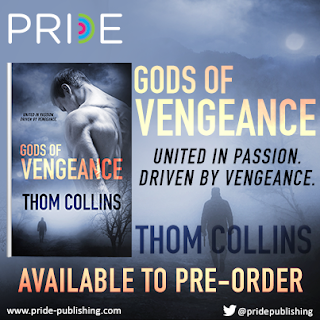 United in passion. Driven by vengeance.
Owen Hazard, a young farmer, is dead. Murdered while he tried to prevent a robbery on his land. His older brother, Captain Mark Hazard, returns home for the funeral. Owen’s best friend, Riley, runs the local pub. He has information about the night Owen was killed—he knows who was responsible. The police are doing nothing. Vengeance is their only option. United in their passion for each other and a thirst for revenge, Riley and Mark must take the law into their own hands if there’s going to be any justice for Owen.
Reader Advisory: This book contains scenes of violence, murder, torture and a graphic scene of sexual assault.
Publisher's Note: This book has previously been released as part of the Brothers in Arms anthology with Pride Publishing.
General Release Date: 21st March 2017